Kicking off the Smithing Skill Share with perhaps the simplest piece created for CPH's current kit: 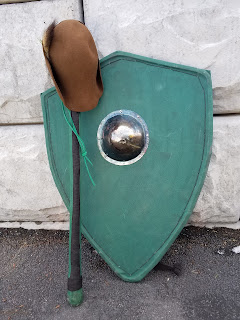 The first SCA Heavy Shield that CPH was able to call their own, was actually a gift. CPH was humbly given their first permanent shield by the material funds and sponsorship of a close friend and the talented hands of the Cliffside Armoury Blacksmith. Before I left for the other side of the country for a few years, my SCA Heavy Kit received a wonderful defensive upgrade so I could still practice Heavy while that far west. So very grateful for this wonderful and unexpected parting gift. 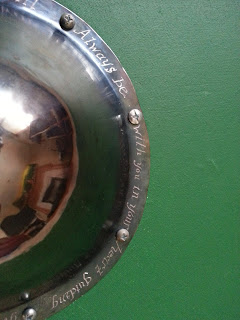 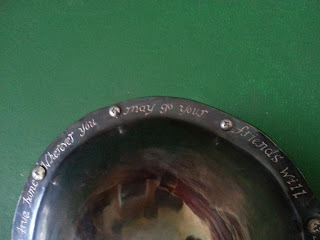 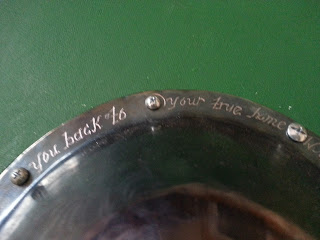 The shield boss reads, "Wherever you may go, your friends will always be in your heart guiding you back to your true home." A fitting quote from LOTR.

Given that this gift was crafted in the dark, actual measurements for how the shield would sit on my body were not taken, and therefore unfortunately never truly set correctly in my left hand. The center grip of the shield was misplaced near three inches too high on the shield, thus rendering the center of gravity way off, concurrently making my head an easier target by those three inches given that I would have to relay solely on my left bicep to keep it up and tight against my body to defend my head vs. it naturally sitting protected due to a correctly placed center grip.

I would fight with this shield for near two whole years before the resources and time came together to craft a replacement.

The shield replacement began as a bartered piece of Sheet Aluminum, that I obtained from a side quest reward. Given that I was content with the shape of the old shield, just not the boss placement, the old shield was traced upon the new sheet of Aluminum and cut out using a bandsaw. 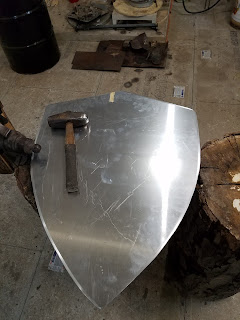 (Missing Photo) The new location for the center-boss was found, the perimeter traced around and the preexisting screw holes marked with sharpie. A secondary circle was drawn on the interior side of the screw holes near one inch in from the previously drawn center boss circle. This interior circle would then be cut out by first drilling between 4-8 holes large enough to fit a metal bladed jigsaw into the opening, before connecting these dots together with the jigsaw blade.

(Missing Photo) The next step involves punching holes about an inch and a half apart along a line offset one inch from the shield's edge. This will be in prep for sewing the canvas shield cover over the shield edging. The center-boss screw holes were also punched with a small caliber drill bit at this time. 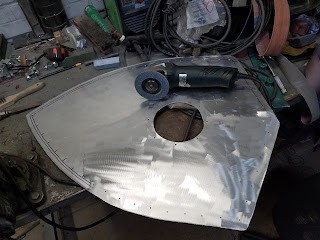 Before the addition of the shield edging, to make the smooth metal more susceptible to adhesive, the metal was marked up by an angle grinder creating chaotic grooves and scratches for the incoming glue to rest on. 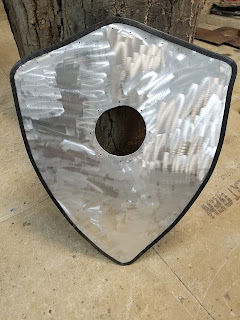 Once the entire shield face has been scarred, it is time to add the shield edging. This dulls the edge of the metal and provides a layer of "safety material" along the edge that not only protects the combatant, but also the rattan sticks that serve as swords. It is best to use one complete piece, getting the edges to meet in one place. Some SCAdians use water hose for this purpose however, this "official" section of black resin edging was provided as part of the reward from the aforementioned side quest.  Side Quests are often worth the time spent in pursuit; never know what hidden reward, knowledge, or experience waits at the quests completion. 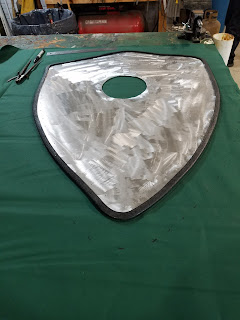 My kit has always been influenced by nature and the earthy tones of the green and brown color pallets. A section of forest green duck canvas was purchased to reflect this. The cloth was cut near three inches offset from the edge in anticipation of wrapping the excess to the back of the shield covering both sides of the edging holes with excess. 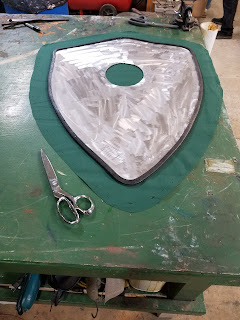 Contact Cement/DAP was used as the applique that would glue the canvas cover to the front face of the shield. Time was taken to ensure there was no wrinkles on the shield face and to fold the excess material around the edges to the back of the shield, resulting in as sharp a fit as possible. 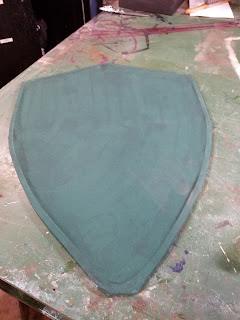 After a bit of dry time, thick wax thread was used to then stitch the cover in place as a second line of defense against breakdown and removal through the interception of damaging blows to the body or head. 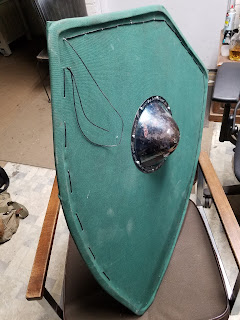 At this time the canvas covering the center grip would be cut out and the boss would be connected with nuts and bolts. These bits of hardware were all scavenged from the previous shield. 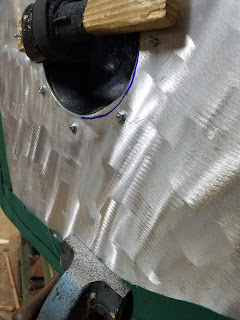 And with the tightening of the final nut, this shield would become complete. I am much more satisfied with how this shield sets naturally on my body and have seen my defensive skill grow because of this adjustment. 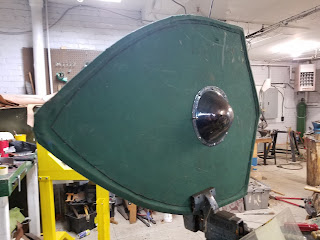 This is not this shields final form. Near nine months later, the canvas has started to rip and the edging has started to fall off, both only being held in place by two pieces of neon green colored duck tape. Perhaps before Pennsic 2018 it will get a face lift... until then... CPH signing off for now... catch ya' on the next skill share. 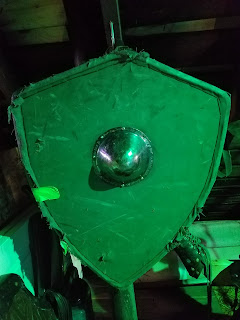 Kicking off the Smithing Skill Share with perhaps the simplest piece created for CPH's current kit:  The Shield The first SCA H...